Two months ago I walked through the airport in tears wondering if I was making the right decision to leave my life behind and start something completely new. I’m turning 25 soon and as many know, I’ve already begun my ‘quarter life crisis’. I suppose that’s how I ended up in China. I’ve struggled lately to accept that life isn’t how I planned it and it’s ok to not be on par with everyone else. I’m getting to experience so many things that I wouldn’t have if my life turned out the way I wrote when I was in High School. It still hasn’t answered the forever dreaded question “what do you want to do with your life?” but for the time being I think this is where I belong.

I wanted to answer some of the questions i’ve gotten from my last post.

To clarify I work for Disney English, not the theme parks. Disney English is basically like an after school enrichment program for Chinese students to learn English. It is something that they have to pay for and do on top of their regular schooling. I have nine different classes with 10-15 children in each ranging from 3 to 9 years old. I teach Fridays through Tuesdays, 2-3 classes each day, and have Wednesdays and Thursdays off. The hours are pretty convenient since I can get up with enough time to explore the city before work or I can go out after work and have time to sleep in. For the most part my classes are well behaved and learning as they should. I’m struggling with two of my classes but I’ve got a few new behavior management strategies to try when we return from national holiday.

I have three roommates, the third just moved in a few days ago. I’m living with two girls studying at the University, one from Italy and the other from the UK, and a girl from Florida who is also working at Disney English with me. It’s been great so far, I’m especially enjoying seeing the similarities between my Italian roommate’s cooking and my family’s. Our landlord is beyond great. Everything i’ve asked him for he’s brought us. One day I asked for the size of the mop head so I could buy a replacement and instead he showed up an hour later with a brand new mop and a Chinese swiffer. I will post my work address for you all since I don’t receive mail at my apartment.

So what have I been doing for the past two months? Quite a bit actually. Here are some of the things i’ve done since arriving in China:

I’ve been to Confucius temple at night. It’s really beautiful, I need to go back and go inside and explore the area a bit more.

I explored Xuanwu lake, only got through maybe a quarter of the area, will definitely be back there. Probably one of my favorite Nanjing sites so far.

Been to the 13th tallest building in the world (7th tallest in China, tallest in Nanjing). This is where I work!

I’ve been to a Chinese club. Very interesting experience to say the least.

I’ve gone to the Hot Springs. It was so amazing! We soaked in tea baths, coffee, wine, milk, and so many different herbs. My friends did the fish pool, I definitely did not step foot in there. 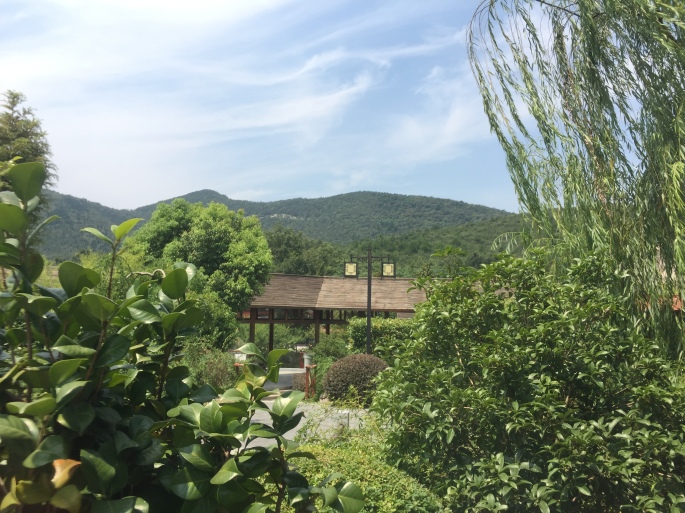 I went to SHANGHAI DISNEYLAND!!! (I’ve been there twice already). It’s a beautiful park, the castle is gorgeous and huge. The park is great although it feels a little empty in comparison to the others. I’m excited to see where they will go in the future. I have yet to see the entertainment offerings since it’s rained both times I’ve gone. I did get to stay at the Toy Story Hotel and see The Lion King in mandarin the last time I went. Both well worth the money.

I’ve gone to the Nanjing Massacre Museum. Really well done museum. I’m definitely not a history fan but I do enjoy a good museum. It was interesting to see something that had such a huge impact on China that I had no idea about. 300,000 people were killed when the Japanese invaded Nanjing (then called Nanking).

And finally for national holiday I went to Hong Kong! What a great city, it was what I’ve imagined San Fransisco would be like (one day i’ll make it to San Fran and compare). It could almost be like a Chinese New York, though I like it a lot better than New York.

I of course went to Hong Kong Disneyland while I was there! I’ve now checked 4 out of 6 Disney Parks off my bucket list! Tokyo and Paris, I’m coming for ya.

On the way back we stopped in Shanghai and went to the Disney Store, the largest in the world, and saw the Oriental Pearl Tower. I haven’t explored much of Shanghai yet, so I’ll definitely be back to see all the sites and hopefully go to the top of Pearl Tower.

It’s been an eventful two months. I’ve already seen so much and yet there’s still so much left I want to see. I’m hoping I’ll get to explore all the places on my list before I leave. So far what I’m missing about America is VPN free internet, shoes in my size, pretzels, and cheese. Especially cheese.

One thought on “take the road less traveled on”